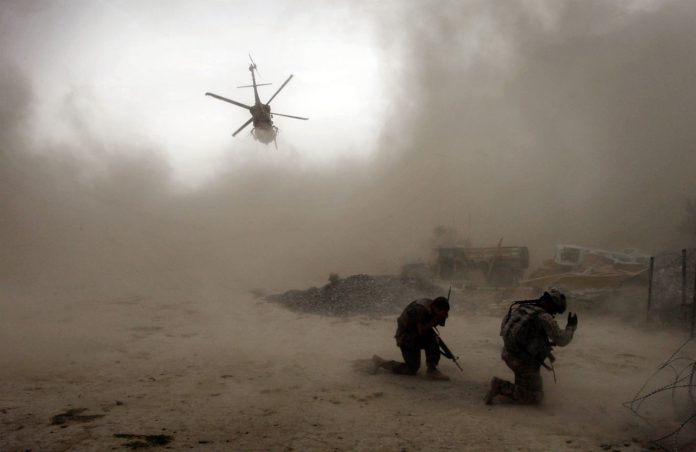 WASHINGTON: On Wednesday night, President Trump in yet another Twitter tirade, gestured towards the complete withdrawal of American troops from Afghanistan by Christmas, which can both be seen as an aggressive timeline to end the country’s nearly two-decade long military presence in the country, and also as a potential bid to attract support for his reelection campaign – as the President trails in polls behind Biden, with only a month to go till Election Day.

We should have the small remaining number of our BRAVE Men and Women serving in Afghanistan home by Christmas!

It remains to be seen whether President Trump’s tweet was a formal announcement, or part of countless policy suggestions being handed down through his massive social media platform, throughout his time in office. This post came around a month after the Commander of the United States Central Command, Gen. Frank McKenzie, announced plans to significantly cut troop presence in Iraq down to 3000 by the end of September – adding that American military presence in Afghanistan would be reduced to 4500 (from 8600) by late October.

In August, Secretary of Defense Mark Esper announced that the planned reduction in troop presence would require a Congressional briefing, in order to ensure that the United States is not “threatened by terrorists coming out of Afghanistan”. Furthermore, it must be noted that under the historic peace agreement being struck with the Taliban, any sizeable troop reduction (under 4500) in Afghanistan must be contingent upon certain conditions, which include an indefinite ceasefire, a reduction in violence, and significant progress to reach a power-sharing agreement in the current government apparatus.

Only last month, the Commander of the United States forces in Afghanistan, Gen. Austin Miller told the media that the violence in the country remained “too high”, adding that “Taliban violence has to slow down — it has to stop. What it’s driving is an increase in violence across the country,” he said. “Their violence has to come down. The world is watching. We have an opportunity for peace, which is what the people of Afghanistan are looking for”.

Gen. Miller, commander of US and NATO forces in #Afghanistan, while in Kandahar with Afghan security officials this week said: “The violence is too high. Taliban violence has to slow down–it has to stop. What it is driving is an increase in violence across the country.” pic.twitter.com/YRnULRaHEO

Earlier this month, NATO’s Senior Civil Representative for Afghanistan, Ambassador Stefano Pontecorvo, warned the Taliban leadership that “there is no going back to the past”, adding that “it is wrong to say that the U.S leaves here (Afghanistan) and NATO remains”.

NATO warns Taliban there is no going back to past – Afghanistan Times https://t.co/o67PJwr1oX

President Trump’s pledge to withdraw the United States from the Middle East has been a key election promise, but the shifting calculus in Afghanistan as a result of his sudden strategic reset could prove to be significantly advantageous for the Taliban – as it cements the inevitability of the American withdrawal, leaving the Taliban no real incentive to respect the peace process.