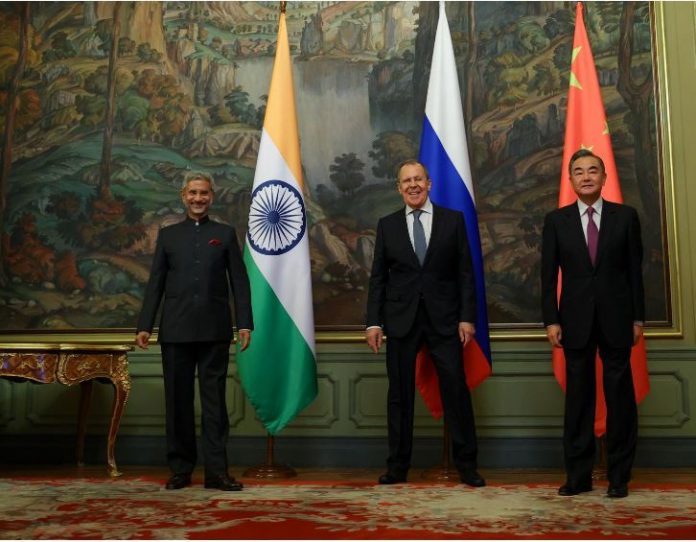 The much anticipated talks between China’s and India’s foreign ministers in Moscow on Thursday managed to clinch a detailed joint statement heralding five consensus points that could potentially become a second Panchsheel Treaty of much transformed China-India relations.

As both Wang Yi and Subrahmanyam Jaishankar underlined, this will launch the “next chapter” of their “new mutual trust-building” to enhance peace and tranquility on their long-disputed borders.

Both began by reaffirming they would be guided by a series of understandings evolved by their leaders, Indian Prime Minister Narendra Modi and Chinese President Xi Jinping. They especially underlined their Astana Consensus: not allowing differences to become disputes.

Second was reiteration on tensions not being in the interest of either side, and that both sides must sustain constant communication and ensure an early disengagement of armed forces.

Their third consensus was on strictly abiding by all extant protocols and agreements evolved to ensure peace and tranquility on the border.

The fourth point was to continue to rely on their time-tested dialogue mechanisms of Special Representatives and the China-India Working Mechanism on Consultation and Coordination (WMCC) on border talks.

And finally both underlined that “as the situation eases, the two sides should expedite work to conclude new confidence-building measures to maintain and enhance peace and tranquility in their border areas.”

Indeed, the simmering demand for such systemic reshaping of India-China ties had been visible in public discourses on both sides. The last three decades – since visiting prime minister Rajiv Gandhi laid the foundations for a peace-and-tranquility chapter of China-India relations – have seen both China and India emerge as major powers with enormous influence and power leverages.

This had seen their bilateral dialogue mechanisms not being able to keep pace with  increasing intensity and frequency of their military encounters on their Line of Actual Control (LoAC, the ceasefire line since their 1962 border war).

From Depsang in 2013 to Chumar in 2014, Finger 5 of Pangong Lake in 2015, Doklam in 2017, the north side of Pangong again in 2019 and from April this year, simultaneous face-offs at multiple points witnessed their dialogue mechanisms betraying their inbuilt deep fatigue. Each time it appeared as if these dialogue mechanism would not be able to resolve the crisis.

Likewise, this time too, in spite of rather frequent meetings of WMCC and flag meetings being moved from brigade to corps commanders and backed up by talks between Special Representatives as well as foreign and defense ministers, the situation did not ease.

In the backdrop of the Covid-19 pandemic – with several other nations already angry with China – this deadlock on the China-India border was also seen in the frame of an assertive China unleashing rapid changes in larger regional geopolitics across its periphery.

Culminating with the coming to power of President Xi, the world had witnessed successive Chinese leaders’ variance from Deng Xiaoping’s dictum of “hide your strengths and bide your time and do not seek leadership” becoming absolutely clear in Xi’s ambitious Belt and Road Initiative, China Dream, rejuvenation of the nation, and two centennial goals unleashing a “New Era.”

In India as well, the early 1990s had witnessed the onset of faster growth rates, an aspiring middle class and, especially since 2014, the end of three decades of coalition governments and the rise of Modi as its hyperactive new leader receiving an enormous mandate in general elections, not once but twice.

As for the disputed China-India borders, the onset of Covid-19 seemed to mark a fast-forward of tensions as well, triggering vigorous military face-offs simultaneously at multiple points of their LoAC.

Rising tempo and tempers in these military encounters resulted in serious casualties in their violent June 15 face-off in the Galwan Valley, followed by the Indian military pre-empting another advance by the Chinese on the south bank of Pangong Lake on August 29 and taking commanding heights on Finger 4 on the lake’s northern banks on September 7.

All these recent incidents occurred in the midst of disengagement negotiations at various levels. These also marked newer face-off points, adding yet another dimension of additional “gray zones” to their mutually acknowledged dozen points of confusion on this LoAC.

It often appeared as if escalation could take a dangerous turn at any time.

On the positive side, however, leadership on both sides continued to negotiate disengagement and talks peace. Not only did India’s response to Beijing remain measured, China’s officials and ambassador in New Delhi were equally circumspect and conciliatory, keeping the doors open for a negotiated settlement.

In reality, China and India have been deeply engaged in trade and commerce, and China remains the largest single source of India’s imports and a major investor in India’s infrastructure, telephony and e-commerce. As their leaders explore piecemeal the new equilibrium of their transformed equations, this joint statement of their foreign ministers surely brings great respite and promise.