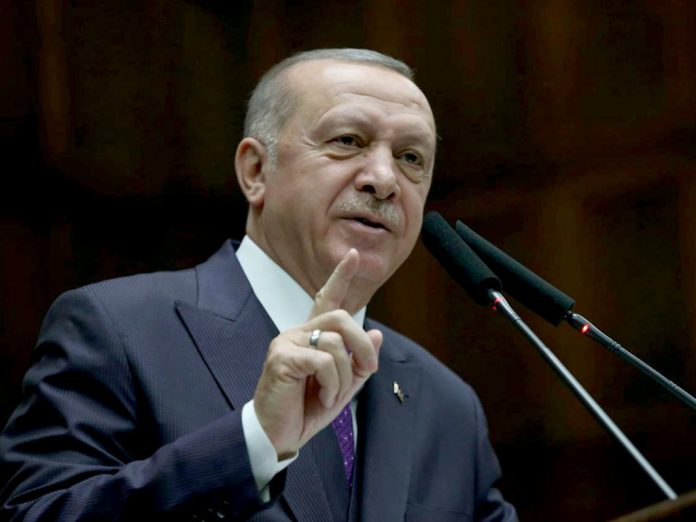 ANKARA: President Recep Tayyip Erdogan on Tuesday played up Turkey’s military might after extending a Mediterranean gas exploration mission that has pitted it against Greece and the rest of the EU. Turkey’s push into disputed waters has raised the stakes in the energy-rich but volatile region, reviving long-standing hostilities between the two neighbours.

Greece accuses Turkey of violating its sovereignty, while Ankara says its NATO ally is pursuing a “maximalist” approach that offers no room for talks. The European Union is watching the conflict with growing concern, with Germany spearheading efforts to get the sides to temper the rhetoric and settle their differences through talks.

Turkey deployed the Oruc Reis research vessel and warships to the disputed waters on August 10 and prolonged the mission twice. Greece responded by staging naval exercises with several EU allies and the United Arab Emirates not far from smaller ones Turkey conducted between Cyprus and Crete last week.

Turkey’s most recent extension of the mission was until Tuesday, raising the possibility of a respite in a fast-escalating conflict that includes deals the two countries struck with war-torn Libya and Egypt. But in a message on NAVTEX, the international maritime navigational telex system, Turkey said late Monday the seismic vessel’s stay in the eastern Mediterranean would be extended until September 12.

The Turkish message said the Oruc Reis was being accompanied by Turkey’s two other auxiliary vessels, the Cengiz Han and the Ataman. Showing no sign of compromise, Erdogan said Turkey would not be intimidated by Greece’s alliance with European military powers such as France.

“Even if hostile fronts unite, they cannot stop the rise of Turkey,” Erdogan said. “It’s laughable now to use as bait a country (Greece) which could not even fight its way out of a paper bag against a regional and global power like Turkey,” Erdogan said in a speech at his palace in Ankara.

Erdogan said attempts to deny Turkey’s right to the Mediterranean’s “riches” were “an example of modern colonialism”. Ankara’s relations with Athens have deteriorated sharply, with strains over issues including migration and Turkey’s decision to convert Byzantine-era churches into mosques including the Istanbul landmark Hagia Sophia.

Images published in the media last week showing Greek soldiers arriving on the island of Kastellorizo, known as Meis in Turkish, appear to have opened another front in the dispute. The island is only two kilometres (1.2 miles) from Turkey’s ancient seaside town of Kas in the Antalya province.

The Oruc Reis mission is being conducted near that island, with the navy also scheduling a series of live fire exercises further to the east this month. Turkey accused Greece of trying to “arm the island” despite a 1947 peace treaty that established its demilitarised status.