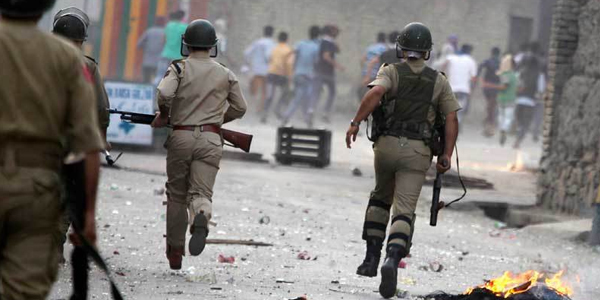 ISLAMABAD: Genocide Watch, a global organisation dedicated to the prevention of genocide, has issued two warning alerts for India — one for the occupied territory of Kashmir and the other for Assam state.

According to the website, a ‘Genocide Watch’ warning is declared by the NGO when there are signs of the early stages of a genocide in progress.

Founded by academic Dr Gregory Stanton in 1999, the organisation exists to predict, prevent, stop, and punish genocide — as defined in the Genocide Convention — and other forms of mass murder.

Genocide Watch has called upon the United Nations and its members to warn India not to commit genocide in occupied Kashmir.

At least 4,000 people, mostly young men, have been detained in Indian-occupied Kashmir since a security lockdown and communications blackout was imposed to curb unrest after New Delhi stripped the disputed region of statehood.

Thousands of additional Indian troops were sent to man checkpoints in the Kashmir Valley, already one of the world’s most militarised regions. Telephone communications, cellphone coverage, broadband internet and cable TV services were cut for the valley’s seven million people.

A report by a team of activists and scholars found that people living under the lockdown expressed “enormous anger and anguish” in response to the surprise move by Modi’s government to revoke autonomy.

Maimoona Mollah, an activist on the fact-finding team, likened the situation in the region to Israel’s security protocol in the Palestinian territories. “Kashmir is like an open jail,” said Vimal Bhai, another activist on the team.

Over seven million people in Assam State, mostly Muslims of Bengali descent, may lose their Indian citizenship and risk imprisonment in special “foreigner detention centers”. A process is now underway to “verify” the citizenship of all 32 million inhabitants of Assam state, which requires each person to affirmatively prove that they are Indian and not an “illegal migrant”.

“At the urging of Prime Minister Narendra Modi’s Hindu nationalist central government, Assam is updating its master list of ‘citizens’ […] Anyone not on the final ‘citizen’ list will be presumptively declared a ‘foreigner’, subject to statelessness and indefinite detention.

“Assam’s Muslims are especially likely to be excluded from the ‘citizen’ list as part of a decades-long pattern of discrimination. The word ‘foreigners’ is a common term of dehumanization used to exclude targeted groups from citizenship and the exercise of their fundamental civil and human rights,” said Genocide Watch.

“The Home Minister of India has repeatedly referred to the Bengali Muslims as ‘termites’. Anti-Muslim propaganda has polarised the Assam population.

Roundups of “foreigners” are likely to ignite genocidal massacres and a massive refugee crisis, the organisation highlighted.

“If India imprisons Bengali Muslims in Assam, it will be violating its obligations under the UN Refugee Conventions. If it expels them from India, it will be perpetrating ‘forced displacement’, a crime against humanity. If genocidal massacres occur, India will violate its obligations to prevent genocide under the Genocide Convention,” added the watchdog.

Genocide Watch called upon the UN Secretary General, the UN Special Advisor on the Prevention of Genocide, the UN High Commissioner for Human Rights, and key UN member states to warn India “not to strip citizenship from, imprison, and forcibly displace millions of Bengali Muslims, many of whom have lived their entire lives in Assam state”.