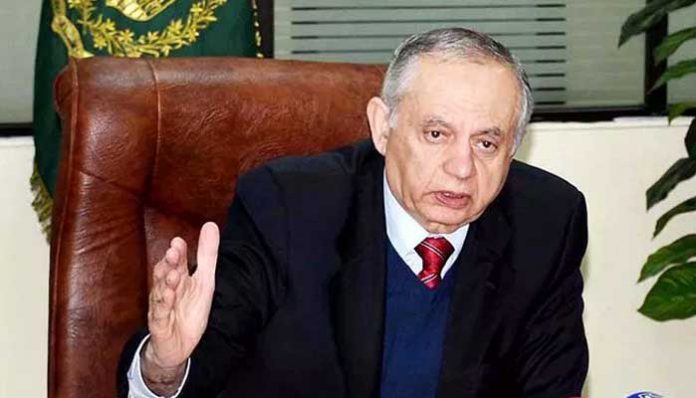 ISLAMABAD: Pakistan is set to overcome its most agonizing headache of current account deficit (CAD) trap, as it will be zero by end of the ongoing fiscal, Adviser to Prime Minister on Commerce, Textile, Industry & Production and Investment Abdul Razak Dawood said.

The interview encompassed trade issues with the US, China and Afghanistan and the government efforts to put Pakistan’s economic trajectory on the right track. If kept in view the monthly trade figures of the month of July, 2019 in which the trade gap has tumbled to $2 billion per month as the export stayed at $1.9 billion whereas the imports remained at $3.9 billion and if this trend continues for the remaining whole current fiscal, then the trade deficit will be hovering at $24 billion by end of June 2020 which will be neutralized by the workers remittances that stand at $21.8 billion in last year 2018-19 against the $19.9 billion recorded in 2017-18 showing the growth of 9.68 percent and incase the same growth kept in view then in the current fiscal, remittance are most likely to increase up to $23 billion.

Moreover the exports will also surge this time reasonably because the export industry has been facilitated by the government at the maximum.’

The adviser said: ‘’I am quite optimistic from the trade figures of July that Pakistan will pull itself from the tormenting issue of current account deficit, as so far the current account deficit has been brought down by 32 percent from $19.897 billion in financial year 2017-18 to $13.587 billion in 2018-19 which will be zeroed by end of June 2020.’’

“The trade deficit in 2017-18 had alarmingly ballooned to $37 billion that has remarkably tumbled to $31 billion in 2018-19 by contracting the imports and now the government firmly intends to further reduce the trade gap to $24 billion,” Mr Dawood said and highlighted the point saying in the same breath that 10 days Eidul Azha holidays had inflicted reasonable loss to country’s exports and domestic commerce as well. “Since we are too much behind the regional economies so we need to work hard more and also need to do away with the culture of enjoying the maximum holidays.”

Citing the example of China, the Adviser said last time he visited China, there was a Labour Day which is celebrated on May 1 across the country and in China being a communist country, Labour Day has too much importance.

He said before Labour Day there was a Sunday—the weekly holiday, but he noticed that on Sunday all the government departments and factories were running in full swing. “This means Chinese scarified the Sunday holiday to celebrate the labour holiday ensuring one holiday in a week and they did not combine two holidays and preferred to work on Sunday and this is the secrete of China’s success.”

Dawood wishes this kind of China policy on holidays be implemented in Pakistan. Touching upon the foreign direct Investment has which has gone down by 50 percent from $3.4 billion in 2017-18 to $1.737 billion in last fiscal 2018-19, the adviser, who also holds the portfolio of investment, admitted the fact that FDI had tumbled but in the same moment he pitched the argument analyzing the reasons of fall in FDI saying that in 2017-18, the main portion came from China for investment and if it is omitted then there will no remarkable change in FDI figures in 2018-19 if compared with that of 2017-18. However, Mr Dawood was jubilant on sharing the fact that in manufacturing sector the FDI had increased by 33 percent.

He also maintained that there were positive signs showing the expansion and investment in textile sector by the business community. Pakistan is now fast moving towards the production of value added products to earn more dollars. This time exports of yarn has reduced by 18 percent meaning by that the usage of yarn in Pakistan has increased which is quite evident from the fact that the exports of value added product that include garments, knit wears and home textiles have increased.

Export of garments and knit wears has increased by 17 percent each whereas the home textile has soared by 16 percent. Earlier, Pakistan was known to export yarn on a large scale which was not less than a crime. The efficient economies uses the raw material and make the value added products and earn the more. Now Pakistan’s export sector is on the right track.

He said Pakistan had got the $1 billion order for exports to China under which Pakistan was to export sugar, rice and yarn. “We completed the task of exporting sugar and rice, but failed to meet the target of yarn export as the yarn is being used by export industry for value addition. Now I would soon visit China and ask Chinese authorities to allow Pakistan export more rice in place of yarn under $1 billion export order,” he said.

Asked when the Free Trade Agreement with China will get effective and operationalized, he said it will be operational either by end of ongoing month of September or in the first week of October.

He said in China after signing the agreements a formal approval was sought from the cabinet and other top decision-making bodies. He mentioned that recently Chinese ambassador held a meeting with him and told him that everything to this effect was on track.

To a question, He while mentioning about the domestic commerce emphasized that the smuggled goods which have flooded the markets are being checked and the process of documentation is underway and to this effect he once a week meets FBR chairman and discusses the pace of documentation and actions against the smuggling of goods into the country.

Having the feel-good factor on actions against smuggling and efforts on documentation, the US multinational company—the Procter & Gamble has shown inclination to invest in Pakistan as the erasing of smuggled goods and documentation of domestic commerce will help provide it the level playing field in Pakistan.

He said that the top man of the said US Company had recently met with Prime Minister Imran Khan and appreciated the actions against smuggled goods and efforts to document the economy saying these steps had encouraged the company to think about investment in Pakistan.

“In the meeting, the prime minister was very clear and determined on the issue of documentation of the economy,” he said. About the trade issues with US, Mr. Dawood said that during last visit of Prime Minister Imran Khan to the US, very positives talks were held and the US entrepreneurs had shown keen interest to invest in Pakistan’s energy sector.

‘If again I was part of the prime minister’s entourage during next visit to the US in September, I will pitch trade issue with authorities in US, and to this effect we are in process to confirm the dates for meetings to be held with US secretariat trade and USTR (US trade representative). “I want both the counties to hold the formal meeting on TIFA (Trade Investment Framework Agreement) to pave the way for more trade ties and investment in Pakistan.” The adviser said Pakistan wanted the US entrepreneurs to invest in food processing industry and make electricity by using the waste of Karachi that will also help clear the business city.

Pakistan also offered US businessmen to set up in desalination plant to provide drinking water to Karachiites. Talking about Afghanistan, the adviser said Kabul was eager to sign with PTA (Preferential Trade Agreement) with Pakistan, as President Ashraf Ghani in his last visit to Pakistan had desired a trade accord.

Mr. Dawood said he was going to Kabul on September 4 for a two-day visit where he will have detailed meetings with authorities concerned to iron out the issues hampering the trade bilateral between the two countries.

Dawood said he will also have a meeting with President Ashraf Ghani. Some months back, Afghan delegation came here and wanted Pakistan to open Wagha border for trade with India for Kabul.

“We told them the meeting is bilateral not trilateral and it should be strict to the bilateral trade issues.”

Pak-Afghan Transit Trade issues, he said, would also be figured out during the visit apart from bilateral trade issues. Mentioning the trade issues with Iran, he said Pakistan owed $114 million to Iran against the use of Iranian electricity.

Pakistan is unable to pay through banks in the presence of US sanctions. So both countries have deicide to go for barter trade of commodities and Pakistan has decided to pay off electricity dues of Iran in the shape of half a million tons of rice and to this effect both sides were in the process to carve out a strategy under which barter trade would usher in. However, Sate Bank of Pakistan has refused to violate US sanctions while dealing with trade issues with Iran and the government has to this effect intimidated the Iranian government.