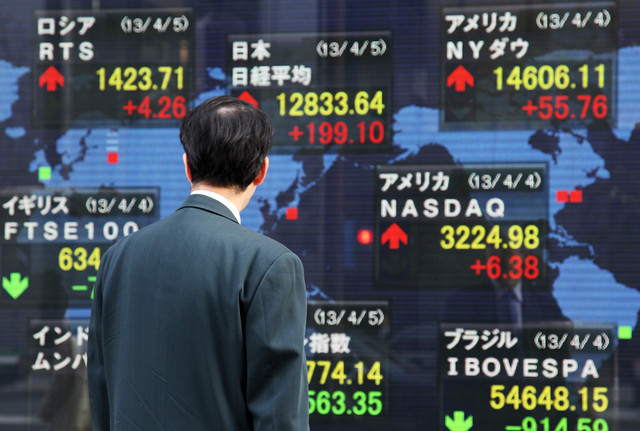 SYDNEY: Asian shares crept higher on Wednesday as the prospect of fresh Sino-U.S. trade talks drew a guarded welcome, while the euro hit lows on a range of counterparts amid speculation the European Central Bank was near to easing policy.
Sentiment had been helped by a Bloomberg report that U.S. Trade Representative Robert Lighthizer would travel to Shanghai next week for meetings with Chinese officials.
White House economic adviser Larry Kudlow called it a good sign and said he expected Beijing to start buying U.S. agriculture products soon.
Japan’s Nikkei added 0.3%, while Australian stocks were up 0.7% after hitting 12-year highs. MSCI’s broadest index of Asia-Pacific shares outside Japan gained 0.1% and Chinese blue chips climbed 0.8%.
Not so welcome was news the U.S. Justice Department was opening an antitrust investigation of major digital tech firms and possible anticompetitive practices.
The department cited concerns about “search, social media, and some retail services online” — an apparent reference to Alphabet Inc, Amazon.com Inc and Facebook Inc.
Facebook reports results on Wednesday, and Amazon and Alphabet on Thursday.
Nasdaq futures fell 0.3% in Asian trade, while E-Mini futures for both the S&P 500 and EUROSTOXX 50 were all but flat.
The investigation announcement took a little of the gloss off a solid overnight session for Wall Street, where upbeat quarterly reports from Coca-Cola and United Technologies helped ease some concerns about earnings.
The Dow had ended Tuesday up 0.65%, while the S&P 500 gained 0.68% and the Nasdaq 0.58%.
Stocks are just a whisker away from all-time highs buoyed by expectations of a wave of policy stimulus by global central banks and a resulting sharp decline in bond yields.
The ECB is thought likely to at least offer a nod to easier policy at its meeting on Thursday.
Futures remain 100% priced for a rate cut of 25 basis points from the Federal Reserve next week, and even imply an 18% chance of 50 basis points.
The prospect of wide-scale central bank largesse helped take the sting out of the IMF’s latest downgrade to its global growth forecasts.
Although yields on two-year Treasuries edged up to 1.837% overnight, they remain far below the cash rate and down 66 basis points for the year so far.
In currencies, the dollar got a hand up from a deal to end the U.S. budget impasse, while the euro suffered a bout of nerves in case the ECB takes a more dovish turn.
The single currency was down near two-month lows at $1.1144, having shed 0.5% overnight. It also hit a near seven-month trough on the yen at 120.45 and a two-year low on the Swiss franc.
The dollar was steady on the yen at 108.13, and near a five-week top on a basket of currencies at 97.735.
Sterling loitered at $1.2440 having fallen for three sessions in a row as the outlook on Brexit got ever murkier.
Boris Johnson is set to become Britain’s new prime minister later on Wednesday, but investors are no clearer on whether he would lead the country to a no-deal exit or find a compromise.
“We may see more market volatility if the EU refuses to renegotiate the existing UK withdrawal agreement,” said BNY Mellon’s fixed income portfolio manager Howard Cunningham.
“There is scope for sterling to weaken further,” he added. “It is also possible it could match some of the lows it hit just after the EU referendum in 2016 if there is no sign of movement from either side in any further withdrawal negotiations.”
Gold steadied at $1,420.59 per ounce, though it was still short of last week’s peak at $1,452.60.
Oil prices firmed after an industry group reported a surprisingly large drop in U.S. inventories, while the U.S. Navy said it may have downed a second Iranian drone last week.
Brent crude futures added 21 cents to $64.04, while U.S. crude rose 21 cents to $56.98 a barrel.