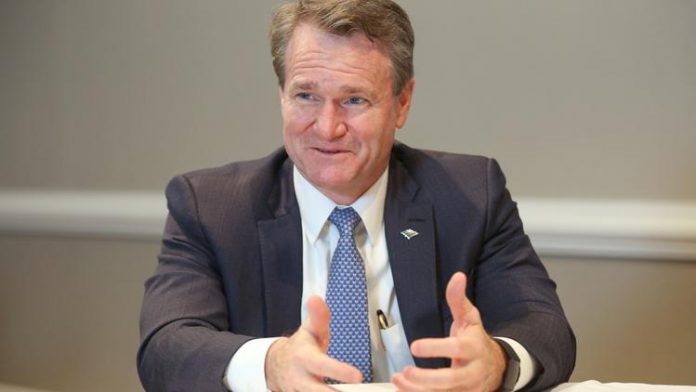 WASHINGTON: Bank of America CEO Brian Moynihan kicked off Fortune’s inaugural Brainstorm Finance conference in Montauk, N.Y., by discussing the tech-driven strides made by one of the country’s largest financial institutions.

Speaking with Fortune editor-at-large Shawn Tully, Moynihan touched on BoA’s embrace of artificial intelligence-driven technology via applications like Erica, a voice-activated virtual assistant used by 7 million customers. By his estimation, the financial institution has “probably spent $30 million on code” over the past eight years to develop and improve its technological infrastructure.

With 27 million mobile customers, 37 million digital customers, and more than half of its transactions already “digitized” via methods like payments application Zelle, Moynihan said the banking industry “will continue to move” toward a digital, tech-enabled models—which, as he noted, are cheaper and more efficient than traditional methods.

“If you think about the major types of technology that people talk about—voice recognition, artificial intelligence, machine learning, robotics—all of those apply to our industry,” he said. “That’s how we reduce the size of our company, [by] applying technology across all procedures.”

Moynihan added that heightened importance of, and reliance on, technology has “changed the way money works,” not only improving the customer experience but also allowing banks to cut billions of dollars of costs. In that respect, the shift to a “cashless society” is one that Bank of America is embracing.

“We want a cashless society,” he said. “We have more to gain than anybody from a pure operating costs [perspective].”

While 75% of Bank of America deposits are no longer made through the bank’s branches, BoA still operates 4,300 physical locations frequented by 800,000 people daily—and Moynihan cited the importance of addressing the needs of all of its customers, from Gen Z to baby boomers. “We have to drive down both avenues at once and build products and services that appeal to the entire customer base,” he said.

Moynihan also touched on the challenges of keeping customers within the “tent” of traditional banking at a time when the financial services industry is more fragmented than ever, with myriad non-bank entities taking a growing piece of services ranging from personal checking to mortgage lending.

In that regard, he noted the importance of ensuring that rules and regulations apply to all players in the interest of a level playing field as well as “customer protection.”

“If it’s a deposit, it’s a deposit; if it’s a loan, it’s a loan,” Moynihan said. “The [banking] industry believes that people have to be governed by the same rules…Half of the mortgage business is done outside of banks today. You’d rather everyone had a common set of rules.”